My love of photography started with my first camera, a Kodak Brownie, at the tender age of six, rapidly developing into a passion to capture all those moments in time.  I followed my dream and studied fine art and then photography and design. Here I learnt to see the art of composition from behind the lens which ultimately changed the way I look at the world.

Next I fed my yearn to travel broadening my horizons where of course my camera was never far from my side!

I landed back in the UK and moved to London and in 1990  “Andrew Yates Photography” was born. My debut was in fashion and editorial photography which then evolved to include people and portraiture. It was within these fields of photography that I gained my technical and creative skills that allow me to capture the subject at hand in an informative and emotional way that can convey an understanding to the viewer.

Things moved on, and as I faced the new and exciting world of digital imaging I changed my viewpoint and started to study the great outdoors with all its inhabitants. The challenge was to establish a look and feel to my work that retained the spirit and depth of film photography.

My work now revolves around animals, both wild and domestic, people and the interactions they have, covering portraiture and “life” images.

In the next chapter in life I have developed a base in Salisbury and a further evolution of my style. I have embraced the fine art process which I feel works so well with my style, helping to bring out the life and depth that I see from behind the lens. With a strong focus on the subject, sometimes removing it from its environment to help it speak louder.

Welcome to my Blog

This is where I will talk about my photographic interests, the equipment I use, what drives me to take a picture, matters that arise from my associations with people and places that I visit and anything else that I think might help give an insight into how I work and see the world.

One of my favourite quotes comes from Man Ray (born Emmanuel Radnitzky; August 27, 1890 – November 18, 1976)  He was an American visual artist who produced major works in a variety of media but considered himself a painter above all, although he was best known for his photography, and was a renowned fashion and portrait photographer.

-  “ Of course, there will always be those who look only at technique, who ask ‘ how ’. While others of a more curious nature will ask ‘ why ’

personally I have always preferred inspiration to information. ”  -

To me that is the key to great photography. When we photograph what inspires us, what we have an interest and understanding of, it will show in the final image. Its not all about getting it technically perfect its about conveying the emotion and an understanding of the subject into a photograph. For me as I generally shoot outside one of the most Important aspects I have to think about is light, now its easy to take this for granted. The sun comes up its light and the sun goes down its dark! But when you actually look and study ambient light it is a very complicated animal, I wont bore you with the intricate make up such as lux ratings and colour profiles etc as thats just too much information for what I want to say. In short ambient light has different qualities at different times of the Day and Year, depending on where the sun is in its orbit (how close or far away it is too the earth) and also where you are geographically.

With animals in the wild it comes down to the light you have when you want to take the photograph, thankfully most animals are most active during the parts of the day when in my mind the light is best, first light and last light, but this is by no means a hard and fast rule, on a stormy overcast day the light can be fantastic around midday when the sun is at its brightest and the clouds act as a natural diffuser, or shooting with a perfect bright blue sky can be a touch boring and give very harsh shadows. But then again shooting a subject in very bright conditions that is shaded under an obstruction such as tree branches can produce amazing results. So its all about reading the conditions and adapting to them. You can photograph the same subject over a period of time in the same location at different times of the day or with different weather conditions and get very different images just by using the available light and changing a few settings in camera.

Here are a couple of examples from my recent trip to South Africa, where due to geographical location the sun is closer to the Earth and much stronger, and also due to the clean air its brighter, so mornings and evenings produce the best light but sometimes you have to work with the conditions and time of day to achieve the shot your after.

The image below was taken mid morning in South Africa, you can see by the shadow length that the sun was quite high and therefore could produce strong shadows and burnt out highlights. I wanted to capture the Giraffe running together so it was now or never. 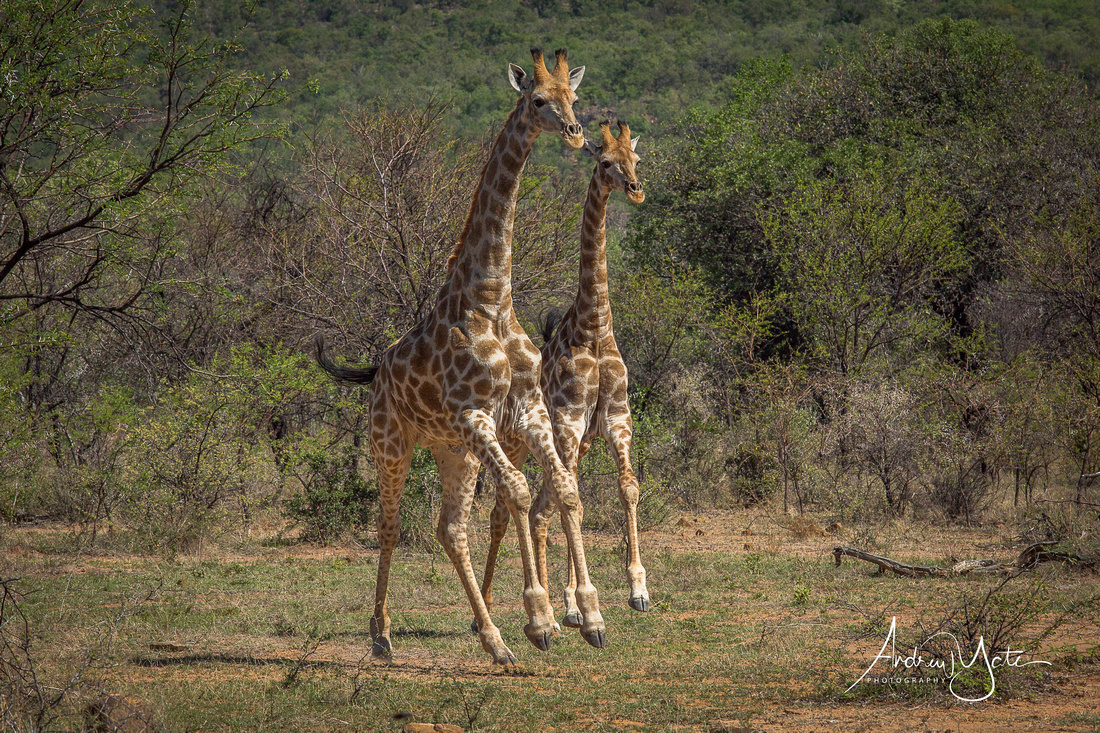 Due to the strength of the sun, the brightness of the ambient light levels made it possible to stop down to f13 and still maintain the settings I needed

soften the image by slightly under exposing and then bringing it back in post process using Lightroom. 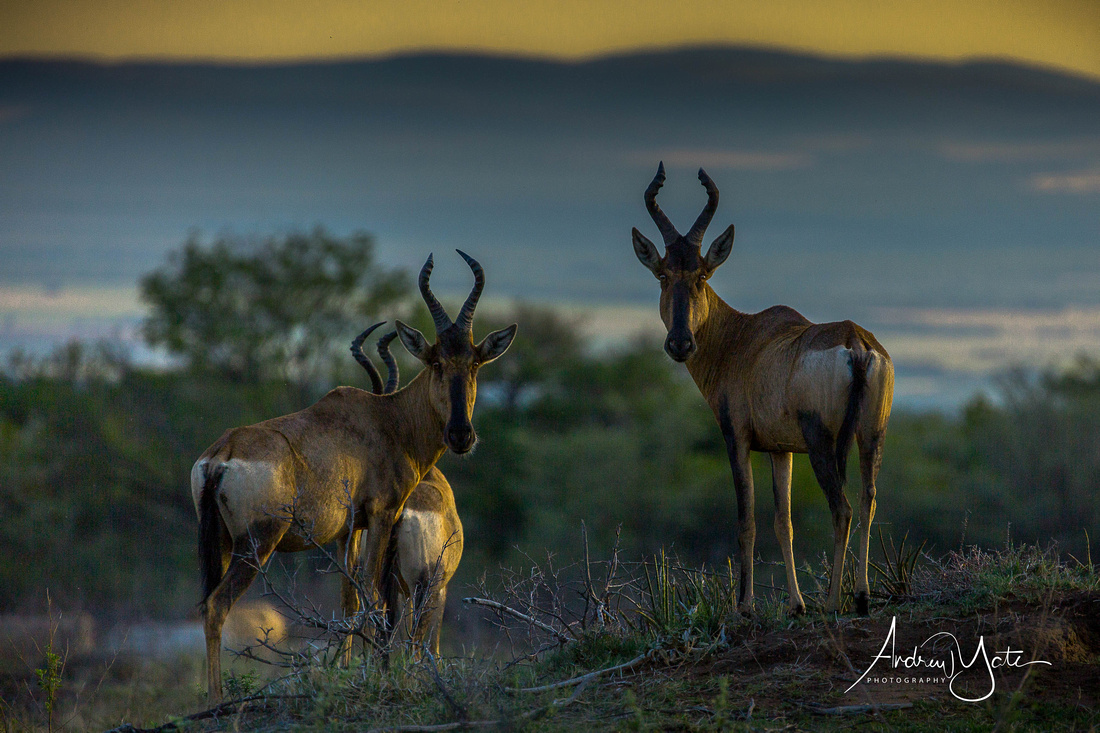 This image on the other hand was taken at sunset, you can see by the warmth of the light and the increase in shadow that the light is much softer, but also that the ambient light levels are much darker, so to capture the warmth and beauty that I saw, with the light picking out the details of the Red hartebeest, from the whiskers on the chin to the catch light in there eyes I had to open up to f5.6 and being almost back lit it would be difficult to hold the detail on the shadowed areas, but by bracketing the exposure I managed to pick out the details I was looking for.

While staying at, and photographing for Ants Nest and Ants Hill Game Reserves in the Waterberg region of the Limpopo Valley in South Africa, I was Fortunate enough to be at the heart of the conservation charity “Save the Waterberg Rhino”  Set up and funded by a group of local reserves within the Waterberg region to combat the daily threat of Rhino poaching and to educate the local population on the benefits of there natural wildlife and habitats.

This encounter opened my eyes to the on going battle that is fought everyday by all the reserves that have wildlife at there core, and ultimately how fragile the animals of Africa and around the world are from the ever increasing Human threat from poaching, habitat loss, illegal game meat, pollution, single use plastics and so on and so on!! Following on from the sad news that Sudan, the last male Northern White Rhino had died, I did a bit of research into the status of the Rhino populations that we have left, and the impact poaching and habitat loss is having on the remaining numbers of the five species of rhino worldwide.

We are also losing 27,000 Elephants per year which is roughly 8% of the remaining population

There is an alarming increase in the Illegal bushmeat trade the illegal, commercial and unsustainable trade in wildlife meat is probably the single greatest threat to wildlife (including lions) in Zambia and surrounding countries in the Southern African region. Illegal Hunting for bushmeat impacts over 500 wild species in Africa, but is particularly harmful to great apes — gorillas, chimpanzees and bonobos

So what is the cost of saving our wildlife world-wide?

The world’s governments will need to invest billions annually to reduce the extinction risk for all known threatened species. A total of US$4 billion (around £2.5 billion) would be needed annually to prevent human-driven extinction and improve the status of all known globally threatened animal and plant species, with a further US$76 billion (around £42 billion) needed each year to protect and effectively manage sites of global conservation significance. Which sounds a lot because it is, but to put this into perspective its equivalent to just 20 per cent of what the world spends on soft drinks each year, and this would be more than repaid by the economic, scientific and social benefit of conserving our precious natural heritage. Showing how relatively little it would cost to save and safeguard nature worldwide.

My message to the powers that be is Its time to act and start to manage and conserve our wildlife before its too late.

We could lose the ability to be able to witness incredible sights like this, if the current poaching rate continues, rhino females would not be able to replace themselves and total extinction of Africa’s remaining rhino becomes probable in less than ten years. If this poaching rate continues unchecked at a 25% increase (assuming the anti-poaching efforts make a difference) the rhino in South Africa could be extinct by 2022. Even if all the female calves born in 2017 survived they would barely be old enough to have a calf before the clock stops! 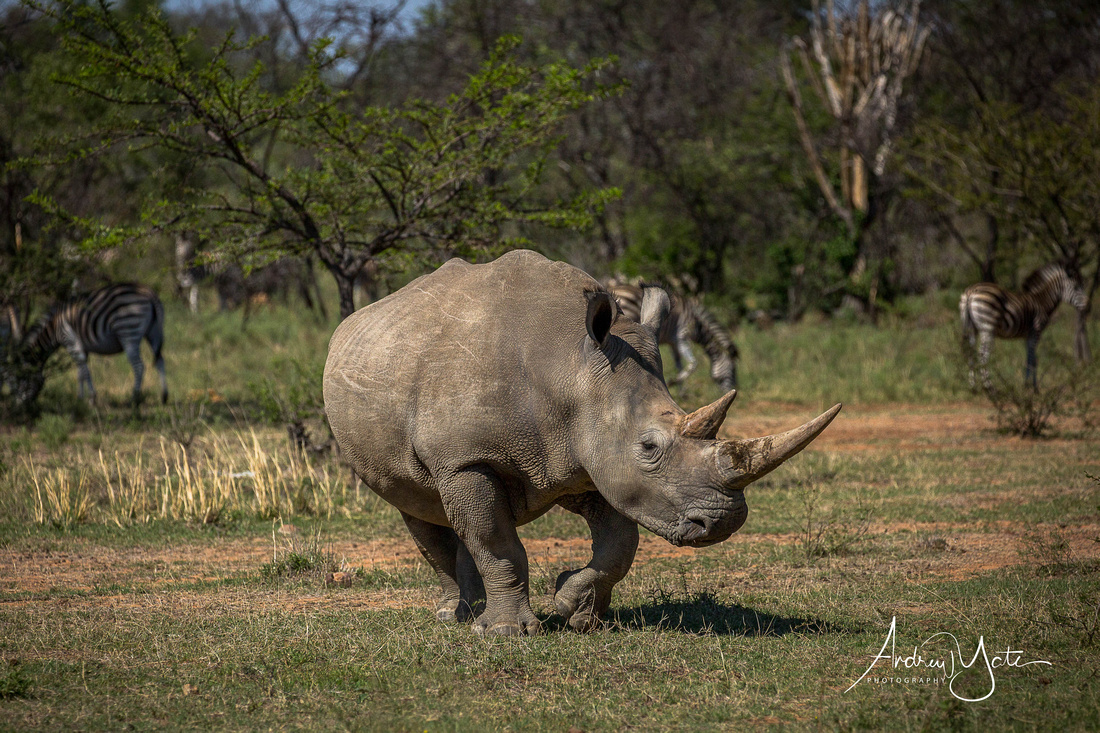