The Cost of Conservation ..... and The Luxury of Travel.

African countries rely heavily on tourism to help fund wildlife conservation. In South Africa, about 85 percent of funding for the country’s wildlife and public lands management authority  (South Africa National Parks) comes from tourism-related sources, such as park entry fees and hunting permits. Over the last two years National lockdowns along with border closures and quarantines put in place during the coronavirus pandemic severely constricted Africa’s $39 Billion Tourism Industry, the direct source that motivates and funds wildlife conservation across the continent,The wildlife of Africa is protected by its dedicated rangers, but the presence of people, including tourists is a major deterrent to active poaching pressure.

Its been two years since I was last able to travel to South Africa, and was so happy to be able to return this year….. and this image is the perfect example of why I miss it……… Its an iconic image and one that can only be Africa, a wild lion enjoying a quiet moment in the warm evening sun.... If I have learnt anything over the last two years its that Travel is a luxury, and it was so easy to take it for granted, I now realise that it should be treasured, we all live our lives in our own small part of the world, and travel gives us the opportunity to expand our own horizons and to explore the dynamics of other countries. We have all lost so much during the past couple of years and for me it's given me a chance to evaluate and prioritise.

Make all your experiences count and enjoy every second….. "Flat Out".... Enjoying a cooling gallop through a dam after a long day in the saddle

The main draw of Africa for me is being able to work with and photograph its many animals and the people who live there. I am fortunate to be able to have great friends who help conserve the Rhino populations in the Waterberg region of South Africa, and one of my highlights as a photographer, working along side the Charity Waterberg Rhino UK and the private reserve Ants Nest and Ants Hill has allowed me unbelievable access to White Rhino, giving me the ability to study, photograph and start to build an understanding of these giants of nature. The White Rhino is mainly a docile animal compared to the Black Rhino, with poor eyesight but great hearing and a keen sense of smell they are quite inquisitive and will approach to investigate what you're up to, with guidance and the ability to stay calm….. this allows for some memorable encounters. So I am proud in celebrating the Rhino and all who strive to protect them, the battle is ongoing to save these magnificent animals, the modern world is taking so much from our planet and we need to secure a future for all the wild places and the creatures that call them home.

"The African Queen"... a low key portrait of a White Rhino

But all this heaven comes with a huge cost.... Wildlife crime and the on going threat of poaching is still a huge problem and one that has I had the absolute pleasure of being able to spend time with @waterbergrangerservices who maintain the security for Rhino populations throughout the Waterberg region. This is a 24/7 365 day operation in a bid to protect the rhino and out manoeuvre the ever present threat of poaching.

I still find it hard to believe that in this day and age we have to put these measures in place to protect wildlife from a fatal threat, for a product that has no benefit to humans at all. Rhino horn is made up of keratin. It is the key structural material used to make scales, hair, nails, feathers, horns, claws, hooves, and the outer layer of skin among vertebrates. Keratin is not medicine.. but due to its high demand for many centuries its value as a carved material and medicinal herb has caused its price too sore, based on the value of the Asian black market, the price for rhino horn is estimated at $65,000 USD per kg. To put this in perspective.. Gold is currently $63,923.08 USD per kg and Cocaine is around $30,000 USD per kg… The world’s long-standing desire for Rhino horn created an upsurge in poaching numbers back in 2008, with increasing numbers of rhino killed for their horn throughout Africa. Poaching numbers have slowly started to decrease since the peak of 1,349 rhino poached 2015, the largest amount killed in a single year. The threat is still very real with total of 394 recorded poaching incidents in South Africa in 2020, an average of one rhino being killed every 22 hours. These numbers have declined significantly in recent years, But the species has had no time to recover from the damage caused, In 2021 a total of 451 rhino were poached in South Africa, of these 124 were killed within government reserves and on private property. While there is a 24 percent decrease in rhino poaching compared to the pre-Covid period in 2019, there has been an increase in poaching on private reserves, I can’t imagine a world without these amazing animals and to loose them forever for nothing more than greed is an absolute tragedy….. only a rhino needs a horn!! 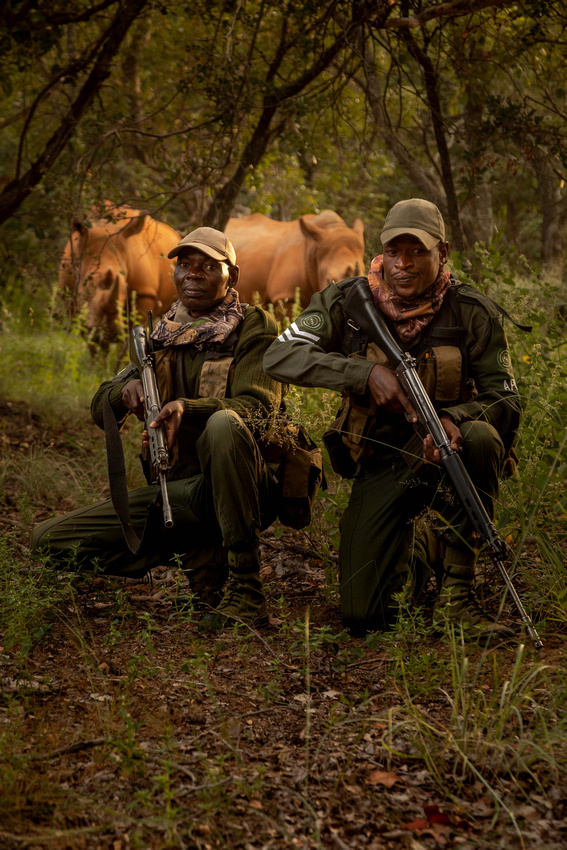 "The Front Line".... Rangers on Patrol in the Waterberg region of South Africa Protecting Rhino

It is estimated that some 22,000 rangers and volunteers work across the African continent in its 355 national parks. In the volatile Virunga National Park in the Democratic Republic of Congo, 140 rangers have lost their lives in the last 15 years. In South Africa, where authorities engaged in approximately 70 firefights in 2015 and recorded 300 poacher sightings. During the last 10 years across Africa a staggering 1000 Rangers have been killed by poachers, they have given their lives trying to protect our world natural heritage. These figures are probably underestimated, mainly due to the lack of reliable data in developing countries, and these figures don't take into account the numerous rangers wounded will out on patrol, but the statistics don't lie, and show just how dangerous the lives are of rangers in African countries. In 2016 82% of African rangers declared that they have faced a life-threatening situation whilst on patrol.

The animals and plants that live in the wild have an intrinsic value to the ecological, social, economic, scientific, educational, cultural, recreational and aesthetic aspects of human well-being. Humanity has wiped out 60% of mammals, birds, fish and reptiles since 1970, If the upper estimate of species numbers is true - that there are 100 million different species co-existing with us on our planet Humans have driven at least 680 vertebrate species to extinction. The dramatic human population growth is so fast that animals and plants are disappearing 1000 times faster than they have in the past 65 million years. Scientists estimate that in the 21st century 100 species will become extinct every day......

Its not just the Rhino and Elephant that are at risk, Eight of Africa’s vulture species have declined by an average of 62 per cent in the past 30 years, for some species that number is as high as 80 per cent. The threats facing these creatures are extensive, habitat loss is a major issue but of all the scavenger species, Human-wildlife conflict plays a part in there plight. Massive losses of vultures can occur if a predator starts killing livestock. Affected communities can put out poison baits to kill the predators, but these poisoned carcasses pose a threat, because vultures are social creatures and eat in large groups of up to 100. So by eating the bait they will fall victim to the poison. Wildlife poachers will also poison the carcass of the animals they have killed in an effort to reduce vulture numbers as they can act as an early warning sign to rangers by circling above the scene.

While in Klasseri Private nature Reserve in the Greater Kruger national Park I looked up to see this pair of White Backed Vultures patiently waiting for there turn to feed on a Giraffe carcass, I love the textures of the old wood and the feathers, and then they positioned themselves in the perfect pose….. sometimes the shot your not looking for just happens, that’s the beauty of photography.

Often considered to be creepy, disgusting creatures mainly due to the actions of a scavenger, it turns out we have got it all wrong when it comes to vultures - they are extremely important to the bio diversity of the landscape, their role in nature of cleaning up the dead carcasses in the bush reduces many harmful bacteria, vultures are equipped to safely digest nasty bacteria including Anthrax, where most other scavengers are not. Without vultures, there’d be a lot more disease in the world.